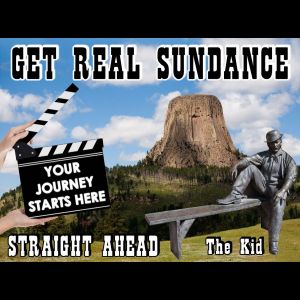 Let the name Sundance evoke images of a rowdy Butch Cassidy & the Sundance Kid leading the Wild Bunch on the longest stretch of train and bank robberies in Old West history.  Then imagine serene Native American villages camped at the base of the majestic Sundance Mountain where sacred Sun Dances were performed.  Immerse yourself in Sundance’s true west story where outlaws weren’t actors and North American cultures were on a collision course.

Sundance became a WY Main Street Affiliate Community in 2016.  With a $33,000 WBC Business Ready Community grant, the Sundance Downtown Master Plan was developed.  The foremost recommendation from the Master Plan continued the partnership with the City of Sundance which generated a $3 million Community Readiness grant that was submitted in December to the Wyoming Business Council for the restoration of Old Stoney, the historic 1923 County High School.  If awarded, Old Stoney will be the foundation of the Main Street and support a community center, entrepreneurial locations and be the permanent home of the Crook County Museum and Cultural Center.  The City is working with JAC and School Facilities to secure an additional $1 million for the demolition of the adjacent, condemned Crook County School District central offices.  This makes way for the development of Historic Old Stoney Town Square & Park.  Further up the Main Street, an additional pocket park is slated for construction in 2017 where the City facilitated an agreement for removal of an empty building at the crux of the Main Street business hub.

As Sundance moves ahead with these major projects in 2017, the Sundance Downtown Association is looking forward to working together with the City of Sundance on future Master Plan projects such as; improving Main Street connectivity, establishing architecture and facade cohesiveness, expanding way-finding signage, enhancing public spaces & amenities, rejuvenating landmarks and constructing new pedestrian and public spaces.