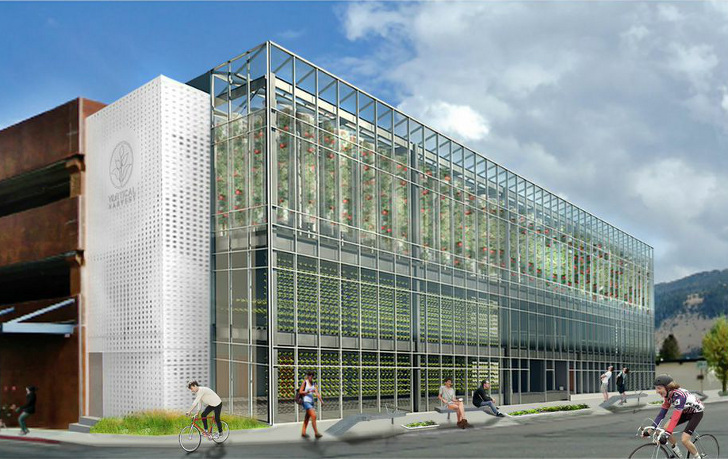 The Cowboy State may be known for its agricultural heritage, but today’s farms and ranches are constantly innovating. Food production looks markedly different than it did just a few decades ago.

Vertical Harvest, in Jackson, celebrated its first year of production at the end of 2016. The vertical greenhouse is a 13,500 square feet and three-story facility located next to a parking garage. The setup, with growing carousels and an efficient design, allows one tenth of an acre to grow produce equivalent to five acres of traditional agriculture.

Although the greenhouse sells locally grown, fresh vegetables year round to Jackson area restaurants, grocery stores and consumers, it is not competing with local growers. Instead, its yield replaces 100,000 pounds of produce that used to be trucked into the community each year.

In addition to produce, Vertical Harvest created 15 jobs for individuals with physical and intellectual disabilities.

Vertical Harvest was designed with Jackson’s climate in mind. A technical assistance grant from Wyoming Business Council in 2010 allowed the organization to complete an in depth feasibility study before going through the expense of the design

Bright Agrotech, a Laramie based start-up, is a growing business based on the business of vertical growing. Serving commercial farmers as well as hobbyists, the company has gardening systems for efficient, hydroponic vertical gardens. The hardware, as well as planning software, was “built by farmers, for farmers.”

The company employs 30 people, including many from the University of Wyoming.

The University of Wyoming’s Agricultural Experiment Station has long been a resource for those who want to research and innovate. The program has research and extension centers in Laramie, Powell, Sheridan and Lingle. Research on tiny organisms such as the alfalfa weevil or Brucella ovis can have big implications for farmers and ranchers by lowering costs or increasing yields.

The university was also part of an effort to increase profits through organic farming and ranching. In February, a conference was held to discuss the methodology of organic farming and certification. In an interview with Wyoming Public Media, organizer Jay Norton said, “there’s a lot of reasons that farmers transition to organic. Some of them are ideological reasons or beliefs that organic food is somehow better. But we’re staying out of that controversy in this conference. We’re sticking to production practices. Organic production is an important value-added path for Wyoming farmers to improve profits.”

Eastern Wyoming College will increase its support of agricultural innovation thanks to a grant from the U.S. Department of Commerce Economic Development Administration. The EDA gave a $1.5 million dollar grant to aid in the construction of an Agriculture Technology Education Center (ATEC). The 27,000 sq. ft. facility will offer students industry leading labs, equipment, and employment resources.

For big agriculture operations and small, small changes can reap big rewards. Public and private partnerships, working to embrace new ideas, are allowing this sector of the economy to continue to grow.